In the two previous issues of Vantage, essays on dulcimers and a medieval rebec from Dr Colin Huehns’s collection of stringed instruments were published. Here, the third essay, entitled ‘Parnassus’, on the Renaissance fiddle follows.

After centuries of gothic scholasticism, the Black Death, and internecine European wars, in mid-fifteenth-century northern Italy something remarkable happened that has shaped the rest of human civilisation: the European Renaissance. Suddenly reason assumed intellectual primacy, even over religious orthodoxy, and at last there could be progress, but where to? Perhaps it is a little soon to tell.

For the performing string player, the fruit of this intellectual reawakening was the invention of the violin, and the Renaissance fiddle the stepping-stone in this journey. With the arrival of bowed instruments in Europe in the eleventh century from the Islamic world, as evinced by depictions in the visual arts, a plethora of different manufacturing styles erupted across Europe and no single template dominated. As soon as the Arab spike fiddle was placed under the neck and played held horizontally (itself a unique European innovation), there was no alternative but for the instrument body to evolve a ‘waist’ so that the bow could make effective contact with all the strings, and most depictions exhibit this feature. 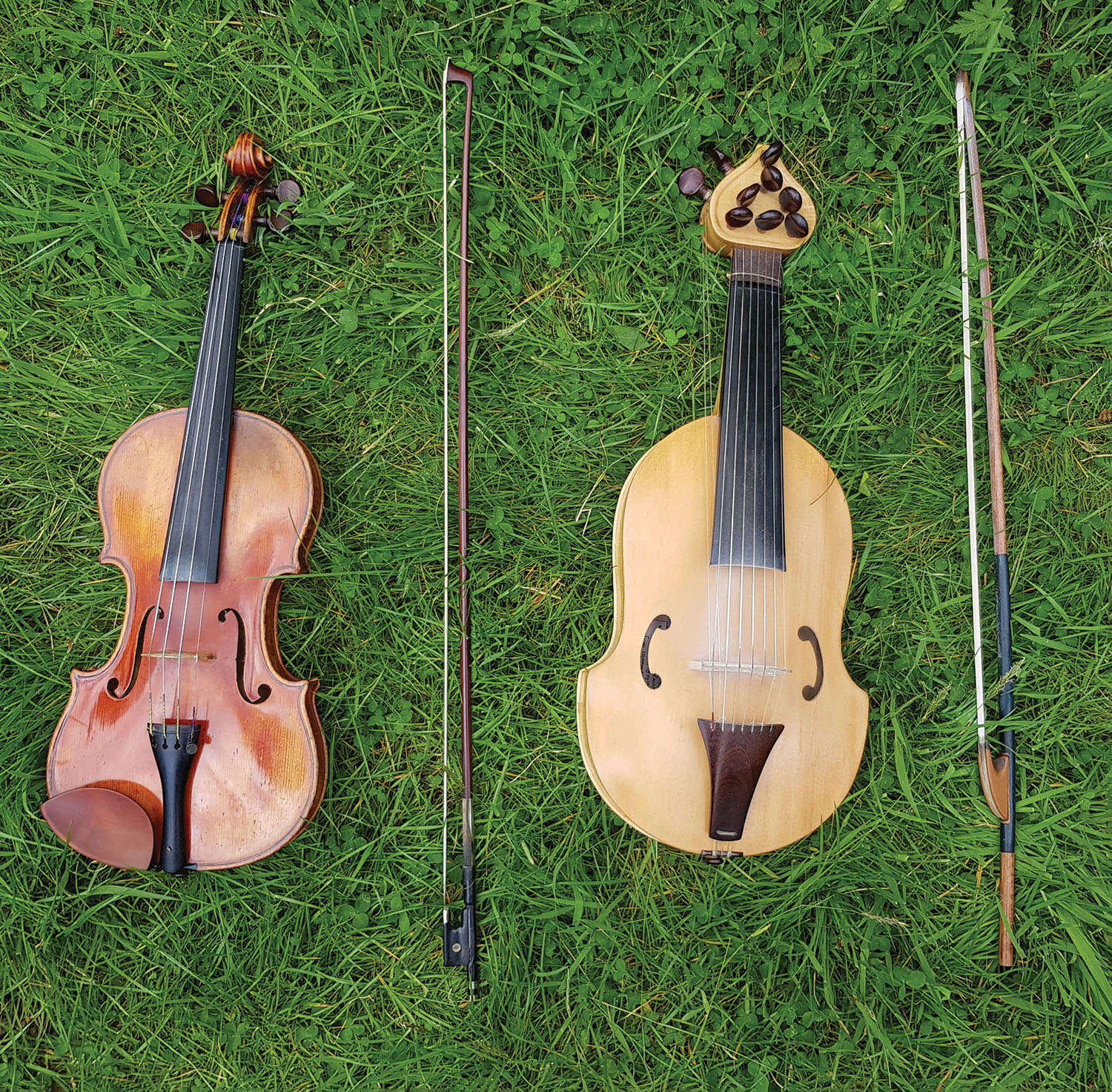 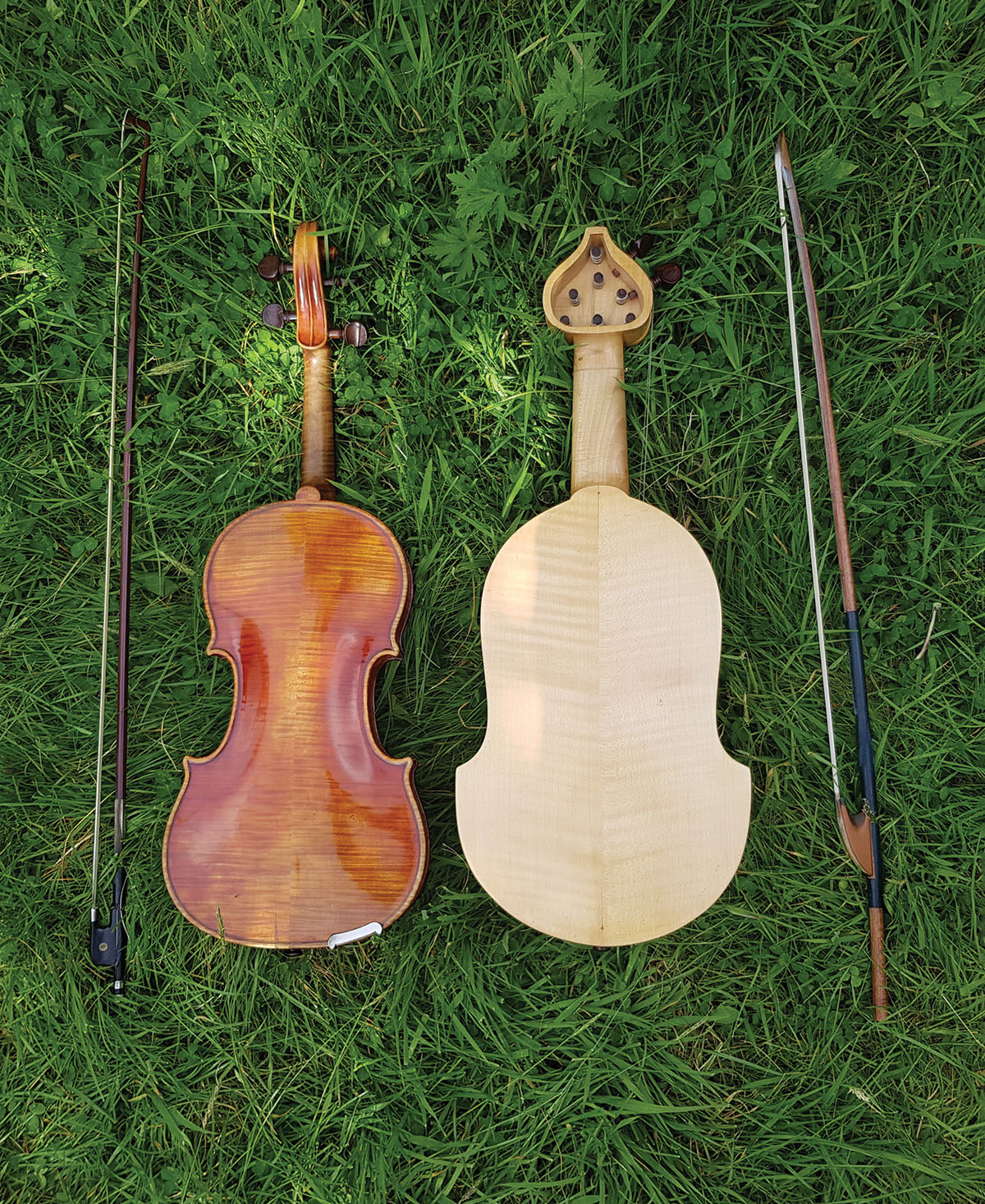 Figure 3: The backs of both instruments. (Photos credit: Tanya Huehns) 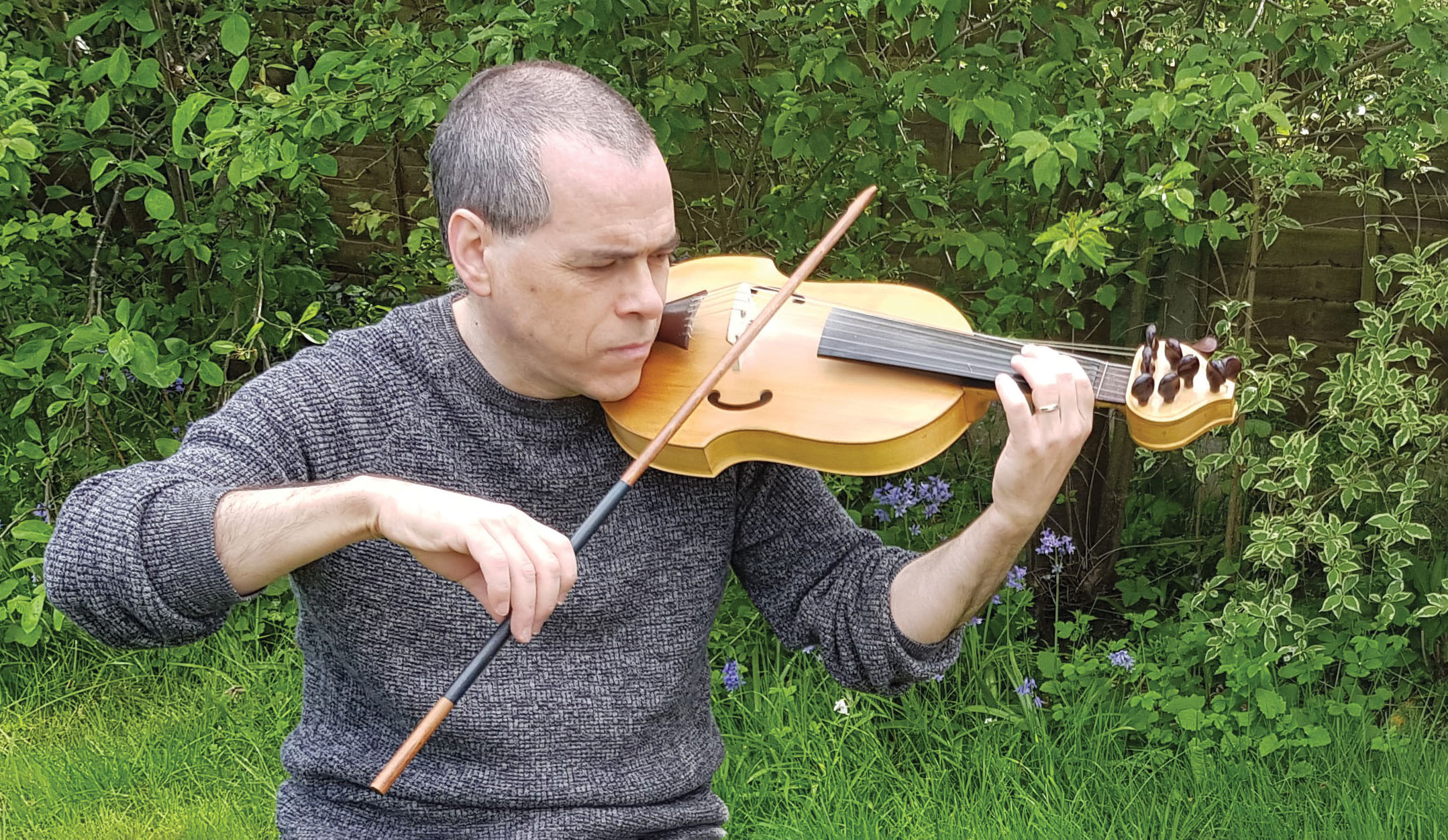 After centuries of gothic scholasticism, the Black Death, and internecine European wars, in mid-fifteenth-century northern Italy something remarkable happened that has shaped the rest of human civilisation: the European Renaissance. Suddenly reason assumed intellectual primacy, even over religious orthodoxy, and at last there could be progress, but where to? Perhaps it is a little soon to tell.

For the performing string player, the fruit of this intellectual reawakening was the invention of the violin, and the Renaissance fiddle the stepping-stone in this journey. With the arrival of bowed instruments in Europe in the eleventh century from the Islamic world, as evinced by depictions in the visual arts, a plethora of different manufacturing styles erupted across Europe and no single template dominated. As soon as the Arab spike fiddle was placed under the neck and played held horizontally (itself a unique European innovation), there was no alternative but for the instrument body to evolve a ‘waist’ so that the bow could make effective contact with all the strings, and most depictions exhibit this feature.

The fiddle shown here in Figures 2–4 is a specially commissioned item using as its template a painting by Raphael titled Parnassus (Fig. 1) that was executed in 1508–1511 and is found in the Papal Apartments in Rome. It is a unique instrument. The maker, Mr Morillo of Argentina, was given a copy of the painting, asked to produce a plan, and, on approval, simply got on with the work. He has done a splendid job.

Virtually everything about Raphael’s painting is true to life: the proportions of the body, its musculature, the facial expression, and even the bow hold (an up-bow is being performed) and the left hand (positioned as if playing a chord with vibrato). This is a master artist at work and his depiction is to be trusted, which is why it was chosen.

The overall aesthetic impression of the instrument is clean, clear, and well proportioned, an embodiment of reason, no less, and extremely beautiful as such. The replica has captured these features precisely. It is light to hold, well crafted, and a faithful reproduction. As with the violin, its front and back plates are fashioned from symmetrical plates of wood opened out like a book, and they have been carved into arched shapes, though not as markedly as those on the violin.

Seven strings can be clearly counted attached to pegs inserted from the front of the pegbox and these strings are positioned over the fingerboard so are stopped by the left-hand fingers as is indicated. Two more are found to the side of the fingerboard and attached to pegs inserted into the side of the pegbox, and these are not stopped. The arrangement of these two in the bridge area is obscured by the bow, but they seem to be passing over the bridge, whereas Morillo has them inserted through it. Their function is unclear, but two strings in the same position appear on several instruments depicted at this time. Perhaps they are sympathetic strings vibrating in concert with the others, but in practice they do not seem to function in this way and have no effect on the sound whatsoever; perhaps they are plucked by the thumb as part of a dance repertoire, but the technique is awkward and the effect uninspiring; perhaps they are drone strings that were never fingered, which is why they are not positioned over the fingerboard: we simply do not know.

The design assumes gut strings, but this is not a certainty. Strings of metal wire were in use at the time on keyboard instruments and there is no reason why they were not strung on bowed instruments. Metal strings at high tension function well as sympathetic strings and add volume and brilliance to the sound. With no information as to tuning, a mixture of perfect fourths and thirds is used for the intervals between the strings, much as is found on instruments of the viol family. The lowest note is D below middle C and there is a usable range of four or more octaves available above that, much like the viola.

With so many strings present, the curvature of the bridge is an important feature of the design and had to be completely remodelled after a few years to improve playing efficiency. The soundbox has a slight waist, which enables the bow to make easy contact with all the strings individually and in chords. If the bridge is too arched, chord-playing is inefficient and awkward; if it is too flat, then stroking the strings individually without brushing adjacent strings becomes a problem. In fact, the current bridge is still a little too flat and great care has to be taken to ‘pick out’ the perfect angle to set them individually vibrating, much more so than on the modern violin. It does, however, facilitate the execution of three- or four-note chords and suggests these were much more intrinsic to performance practice. This, and the complexity of fingering with the strings tuned in thirds and fourths, means that the tendency is to play almost entirely in first position, except for higher notes on the top string.

Playing solo and clearly the centre of attention, Raphael’s fiddler is evidently a master performer. He is strongly built and sits pleasingly erect. His right arm is nicely balanced, shoulder not hunched, and wrist softly pliant. His left hand hangs appropriately under the instrument and even his left thumb is where it should be and not pushed backwards towards the pegs, as is so often seen with modern violin players. My playing technique is to apply a fulsome wrist vibrato, much to the chagrin of players trained in the assumptions of the modern style of near vibrato-free authentic baroque performance practice, but the argument supporting this choice is the flat angle of the fingers stopping the strings, which suggests a rich vibrato, otherwise a much more rounded finger angle might be expected.

The only problematic aspect of the entire composition is the angle of the instrument inserted on the neck. It is in fact balanced on the left shoulder and, frankly, I cannot make it work in this position. Do we trust Raphael and assume that he has painted accurately? Or do we assume that he has exaggerated this aspect for some reason? When I play, I do, however, place my chin over the lower bout of the instrument, so I am halfway there in this respect.

The bow came separately from the instrument and, typical of depictions at the time, does not have the block at the point that evolved in France in the late eighteenth century and is seen on the modern violin bow. This means that it is less easy to maintain a sustained pressure through the whole of the bow stroke, and that the bow does not ‘grip’ the string so easily. There is less hair, so rosin needs to be applied much more copiously and more often.

Having acquired the instrument, the next step in the process was technique and repertoire. My assumption is that it has the capacity to produce a virtuoso range of advanced styles equivalent to those of the violin. First, I produced an entire scale book using only seven-note modal scales: Ionian, Dorian, Phrygian, Lydian, Mixolydian, Aeolian, and Locrian, such as were in use at the time the instrument was made and seem appropriate to its clear and uncluttered design. Most of these scales were also in double stops as their sound is pleasing and seems at the heart of the musical aesthetic of the instrument. Pentatonic and chromatic scales were also included, but not major or minor, as these belong to a different era and idiom, one of restless voice-leading, chordal progression, and eventually extreme dissonance, whereas this instrument inhabits reason and exudes rationality.

Repertoire items started with duets with the virginals and arrangements of William Byrd’s compositions in Parthenia, and the timbres of the two instruments suited each other perfectly. Viol and lute music exists from the early sixteenth century onwards and can be successfully arranged, with a favourite item being a set of variations on the tune ‘Greensleeves’. Collections of keyboard music, whether organ or harpsichord, are found from the fourteenth century onwards and yielded many precious gems. It is even possible to play instrumental ricercare in four-part counterpoint if some of the voices are omitted, and the results, although technically challenging, are musically satisfying.

Ludovico Ariosto’s epic poem Orlando Furioso was written at virtually exactly the same time the fiddle was made. In it, verse 76 of Book XLVI gives something of the bearing of the Renaissance man who would have listened to its performance and perhaps wandered in the Papal Apartments and admired the paintings there on classical themes. The translation here is by fellow alumnus of King’s College, Cambridge, John Harington, courtier to Queen Elizabeth, and was completed in 1591:

Of Poets then, and of Philosophers,

About him you should see a worthy band,

Making him know the course of the wandring starres [stars],

How Heav’n doth move, and why the earth doth stand.

Or reading Elegies, or verse of warres [wars],

Or sometime instruments of Musick hearing,

In all his acts a speciall grace appearing.

Essays 1 and 2 were featured in the two previous issues of Vantage and this is the final essay on the same topic.