Vantage is honoured to have invited Mr Mark Forkgen, the Director of Music at Tonbridge School, for an interview to share his experiences and perspectives on music and education. 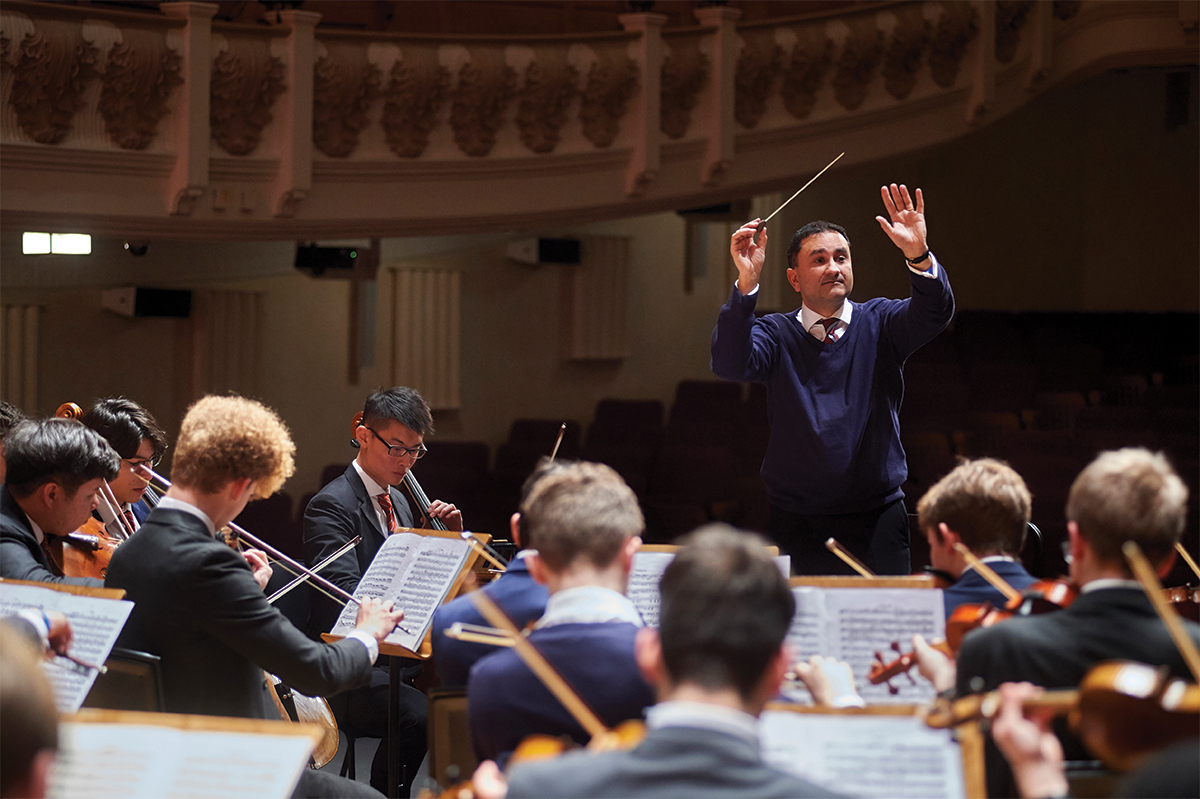 What was your music training like when you were young? What instruments did you start off with? And how did they all lead to Cambridge reading music and the Guildhall School of Music and Drama afterwards?

My first interest in music was as a chorister, aged seven, singing in my local parish church. I also started piano lessons at the same time. However, my real inspiration came when I was awarded a choral scholarship at the Temple Church in London, under the legendary Sir George Thalben-Ball and subsequently John Birch. They encouraged me to take up the organ (once my feet could reach the pedals!) and ended up teaching me. I didn’t realise at the time how lucky I was to be the recipient of such teaching and how top-class teaching, even at a young age, can both inspire your musical outlook and last a lifetime. I still think of John Birch over my shoulder, pencil at the ready, when I play something that isn’t up to standard. My cello playing, alas, wasn’t going to trouble the scorers, but it did get me into the school orchestra.

During my sixth form, I was organ scholar at the Temple Church and often helped at concerts at the Royal Festival Hall or Queen Elizabeth Hall, turning pages, listening for balance, or just soaking up the music and performance. As a result, I knew that I wanted to be an organ scholar, but not to be confined to the organ loft. Tim Brown, who was then at Clare College, Cambridge, advised me to go to Queens’, where I could try my hand at lots of different skills – it was one of the best pieces of advice I’ve been given. At Cambridge I certainly tried everything I could, in addition to the music course, playing on both organ and piano, acting as an MD and composing original scores for numerous shows at the ADC Theatre, and of course choral and orchestral conducting. By my third year this had become my main musical outlet, conducting in chapel for the Queens’ Music Society and being drafted in to conduct for other colleges as well. I realised that I had no technique and just did things on instinct so took a year out to attend some courses and get some lessons, while working full-time at Harrods to help pay for a year’s postgraduate study. I was then lucky enough to be awarded a scholarship to study conducting at the Guildhall School of Music and Drama.

You have been music director of Canticum and the London Concert Choir since the 90s. Would you like to share with us how your interest in choral conducting has been cultivated since you were young?

The choir at the Temple Church under Sir George Thalben-Ball had a unique way of making music. He played the organ and the head choristers on either side kept the choir (including the far more experienced adult singers) together by just nodding at the important moments. I guess that lit the fire in me at a young age and taught me that you made music with people rather than direct them from on high. It also made me realise that it’s better to get out of the way when you’re not needed and that building a sound and a way of music-making week in, week out gave a choir its sense of togetherness.

What would be your considerations when (a) accompanying a choir on an organ in a church, as an organist, and (b) conducting a choir and ensemble in a church?

Accompanying a choir as an organist in a church is one of the hardest musical jobs. You are always having to deal with different instruments (of varying quality), different acoustics (ditto) and vast distances between you and the choir, sometimes having to play more than a beat ahead. Rehearsal time is often limited as well, so you have to know the music inside out and guess the balances. Once you’ve coped with all of this, you can then think about the nuances of the music. Conducting in these situations is more a case of thinking on your feet. Tempi may need to be different, the positioning of the choir, and voices within it, may need to change. The diction level of the singers and sometimes even the pitch need to be altered. A number of churches have sweet spots in their acoustic for different keys. We’ve often sung at 445Hz to make a building come to life.

With Canticum, the repertoire ranges from early music to contemporary music. Has performing contemporary music been its main focus? Would you like to share with us some experiences of collaborating with living composers?

Canticum is certainly not exclusively a contemporary music choir. In fact, the constitution states that we should champion the works of JS Bach as the choir was formed from members of the London Bach Society Chorus when it folded. We’ve been lucky enough to collaborate with some truly wonderful composers who have entrusted their work to us. I think the strength of these relationships has been that composers have been real friends of the choir or have at least heard us perform. Sir Peter Maxwell Davies gave us a piece that the original commissioner found too hard, Hywel Davies and Stephen McNeff have written pieces with our specific voices in mind, and we’ve worked with composers who don’t normally write for choirs, like Fraser Trainer and Colin Riley, taking us all out of our comfort zones.

In your opinion, do you think early polyphonic choral pieces are performed enough these days?

Probably not, to be honest. The magnificent, small professional consorts have performed this music with such style and clarity that many larger groups have stopped programming the repertoire. I always try to include some Byrd, Tallis or Palestrina in mixed programmes with the London Concert Choir. The musical disciplines required to sing this music are invaluable for any choir, big or small, young or old. My worry is that lots of “concert”-style singing from memory, as good as it is for performance, doesn’t necessarily lead to nuanced, sophisticated interpretations of complex music.

We were asked to perform the work at the Cheltenham Festival. Figure Humaine is known as the “Everest of choral works”, so when they threw down the gauntlet we found it hard to resist, even though the programme also included three first performances, two of them choral. In the UK, we tend to stick to a few well-known pieces and composers when it comes to French choral music. The repertoire is so different to that of our own composers and choral tradition that we can find its eccentric mixture of styles and characters slightly difficult to fathom, especially in sacred music.

You are also principal conductor and artistic advisor of Kokoro, the Bournemouth Symphony Orchestra’s contemporary music group. Would you like to tell us about this group?

I’ve been principal conductor for over 20 years. We have a flexible line-up, from four players up to 20 or so, and introduce music of today and twentieth-century masterpieces to audiences around South-West England. We’ve performed in concert halls, churches, art galleries, comedy clubs and even the Olympic sailing hangar. A lot of our work has been project-based, bringing together communities (youth orchestra and choirs, adult groups and professional musicians) for themed festivals, commissions, workshops and recordings. 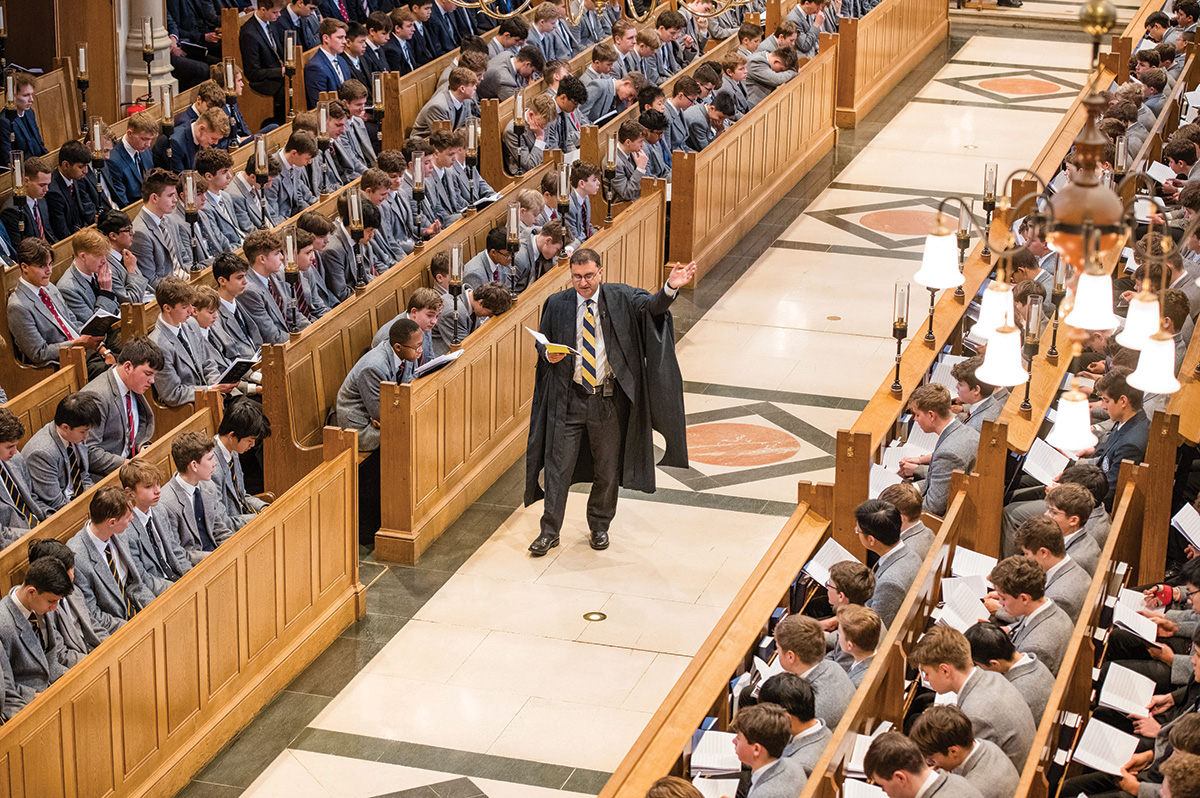 You have premiered more than a hundred and fifty works, including theatre works and contemporary operas. Any particular reason why you are into contemporary music?

My interest in modernism was sparked by Robin Holloway’s lectures when I was at Cambridge. A composer’s insight provided a way into the vast array of musical languages. Moving to the present day seemed an obvious step. I’m genuinely excited to discover new pieces and be the first to perform them. It’s such an honour to be the first to bring a new piece to life and help show that music still has something relevant and different to say in today’s world.

I hope we get to perform our new piece at Tonbridge, a commission from Hywel Davies. It is an oratorio setting of Jason and the Argonauts for soloists, treble choir, symphony orchestra and a chorus part for the whole school. Let’s hope we can get singing again soon!

You joined Tonbridge School as a music director in 2006. What inspired you to get into music education? And how rewarding do you find being a music educator?

I’d always worked in youth music alongside my professional work, especially as conductor of the Scottish Schools Orchestra Trust, the Dorset Youth Orchestra and the Ealing Youth Orchestra. My role with these groups developed into being more than a conductor, taking an active role in the students’ all-round development. When I was approached by Tonbridge, I realised my most cherished musical experiences had been these youth groups and my own groups, rather than professional guest conducting. Nothing beats the thrill of sharing music with people discovering it for the first time.

As music director of both a leading UK independent school and professional choirs and orchestras, how do you juggle the time in between teaching, practising and rehearsing and other aspects in life? Also, what do you do differently when trying to inspire a school choir compared to professional choirs?

I’ll not deny that it’s difficult and you have to be pretty organised with your diary a long time in advance. The different types of group feed into each other and keep your music-making fresh. I try to treat everyone as musical colleagues, whether they be seasoned professionals or students experiencing it for the first time. Professional groups want you to be an individual and to show it all without saying too much, if anything. Of course, the role is different for a school group, where part of the process is explaining the music and the stories behind it. Anecdotes often give them the way in rather than just saying “play that forte”.