On this occasion, Vantage had the opportunity to find out from pianist composer Evelyn Chang about her very first official music publication – Fantasies for Children Miniatures for Piano Solo. 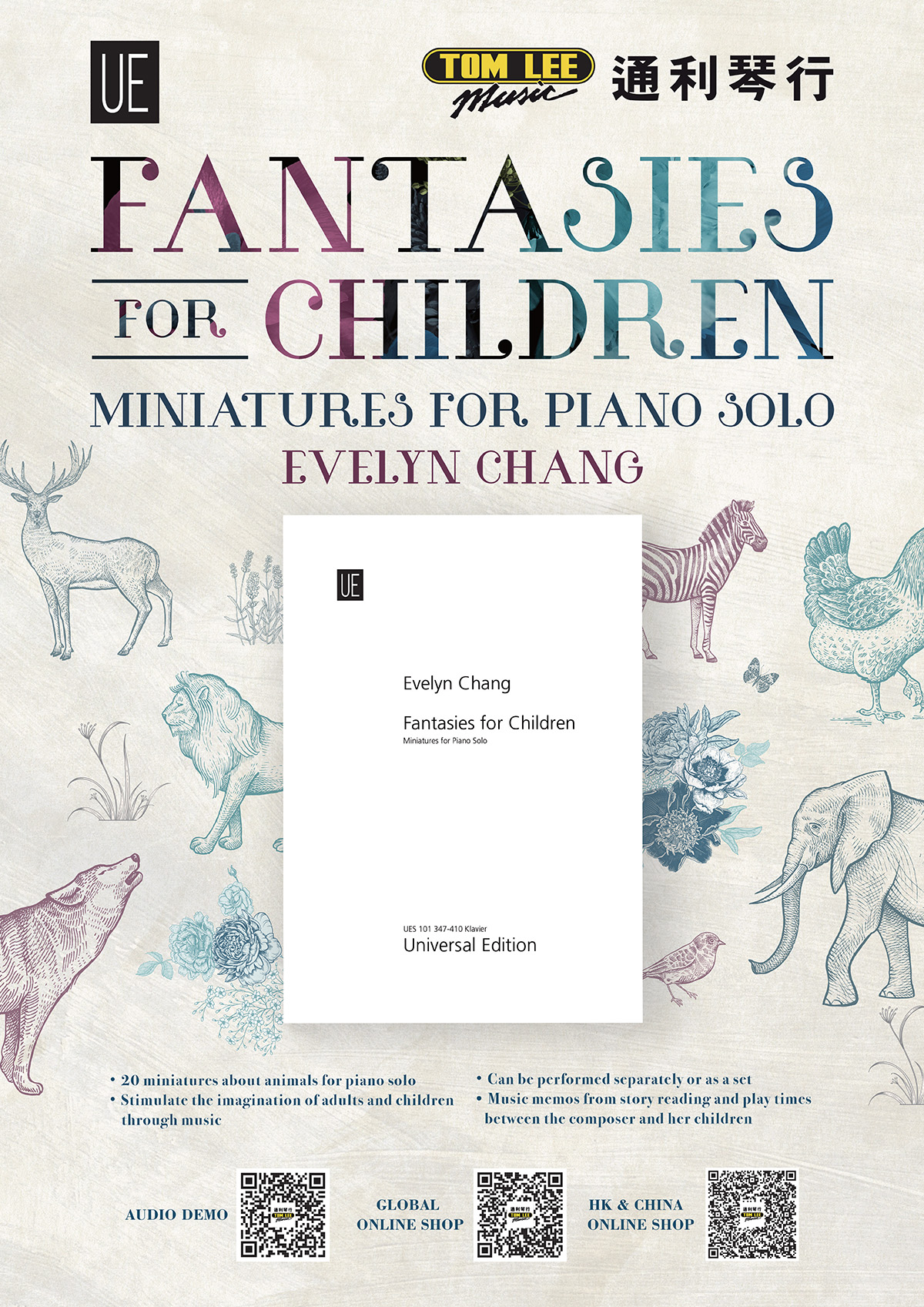 Is this your first composition? If not, what else have you written before?

It is not my first but it is the first to be published. I wrote a string quartet in my teens and various incomplete projects along the way. The most recent one before Fantasies for Children was for a commercial video, for accordion and flute.

Has composing always been your passion in addition to performing? Or has it been a calling more recently?

Well, it probably was not as serious as composing. When I was a kid in music school in Taiwan, a few friends and I would gather together in practice rooms when teachers weren’t looking; instead of diligently concentrating on our own practice, we would muck around with the instruments and make up things, be it tuneful music or experimental but mainly make up something funny, theatrical, for a good laugh.

Then later, when I went to the Purcell School in London, we had great music teachers of very diverse styles. We were taught more compositional skills as well and exposed to all kinds of music. I enjoyed writing music then, especially having schoolmates of exceptional performing talents playing my compositions and giving feedback, working on the music together. The experience was priceless and it also encouraged me to think, maybe I could really start composing more. However, that thought very quickly went as all the schoolwork, practice and teenage life overtook it.

The ideas of Fantasies for Children were jotted down here and there over the years since I became a mother. They were just like memos; I never got around to developing them. Exactly around this time last year, a very dear friend of mine asked me to write lyrics for her new album; she is a very well known singer/songwriter in Asia. I was overwhelmed by her appreciation of what I wrote. The fact that she was not afraid that I might not do her music justice given it was my first time gave me more confidence to attend to the creative side of myself, after which I decided it was about time I started writing down what goes on in my head as a way to record my life journey, some memories to leave for the kids.

Who have been the most influential composers in your musical journey so far? How did he/she affect your writing?

This is a hard question! There are too many! That’s not to say that my writing is directly influenced by any of the great giants throughout history. I feel all the compositions I have heard, played, composers I have encountered, all left a mark in my journey. They all inspired me in different ways and at different times. There were periods I was into Prokofiev, Shostakovich, Desyatnikov or, say, Ravel’s orchestral music at one point and Beethoven’s string quartets another. Right now, I am totally mesmerised by Fazil Say’s Four Cities for Cello & Piano. I wouldn’t say they affect my writing as such, but they are certainly great inspirations that I listen to with much admiration.

You have always been keen to work with contemporary composers. Any interesting experiences you could share with us? Would this also be part of the inspiration for your work?

Yes, it is very refreshing and exciting to be able to interact with living composers who could answer all your concerns instantly! If I remember it correctly, I was in Dublin; there was a chamber work that required me to hammer the piano strings inside the piano: literally, they provided me with a hammer! Somehow I had only learnt about it just before rehearsal. I looked at the beautiful piano in front of me with horror, wondering how on earth I would be able to do this knowing that it is everything they teach you NOT to do to the piano since the day you know what a piano is. As everyone was busy setting up the room, equipment, acoustics etc., I spent the whole waiting time contemplating what would happen if I said no to playing this piece at this last minute. Moments later, another much more run-down piano was pushed into the room. Though it was a relief, but still a piano, I managed to finish the concert with slightly less guilt in the end.

I also had the privilege to know the late Ma Shui Long, one of Taiwan’s most prominent composers. To me he was not just a mentor in music but in life in general. I was still living in London at the time; every time I returned to Taipei he would take me out to Taipei National University of the Arts to understand more of the music environment in Taiwan. We would have lunch and long conversations on music and life. He was very generous in sharing his experiences, point of views, advice. There were times we would go to his studio to check out scores. He showed me Crumb’s score given to him by Crumb and the stories of his years in Germany. Not only a fine musician; he was also a great painter and poet. He wrote amazing calligraphies. Later I recorded his piano work A Sketch of Rainy Harbour with his consent. I chose this work because it was written at a time before he went to Germany, as a self-taught composer, full of innocence, purity and a strong love for the land of Taiwan. I have a vivid memory of the moment he walked towards me from the audience seats to take a bow after I performed his work, the kind face with artistic long hair, a gentleman’s silhouette, the support of his presence that I treasure until this day.

Psychologically, I felt I had more freedom playing contemporary music, less played, less pressure. In doubt the composers could always let you know what they meant. As if music by Bach or Beethoven were sacred. I had too much concern over the true meaning of the music and the numerous monumental recordings by the masters until I met the great British jazz saxophonist Paul Dunmall. I first played with him when we did Brian Irvine’s Montana Strange for Symphony Orchestra, ensemble and improvising saxophone. It was in Dublin’s National Concert Hall, a live broadcast concert. I was part of the BBC Concert Orchestra with Brian Irvine’s own ensemble and Paul’s solo improvisation. It was a fun combination of the classical orchestra dialoguing with big band and jazz. During rehearsals I was often fascinated by the chemistry from the synergy and the powerful expression and total freedom coming out from Paul’s improvisations that I at times forgot I had a part to play, too! Later I got to know Paul a bit more and we decided to make an album together. Recording an album for him means recording improvisation on the spot and for a classically trained pianist like me it was an eye-opening experience. Literally no retake, just played, explored, making conversations with instruments. Very daunting at first, but when I was able to stay totally present, the strong energy of serenity and connections with self, inner voice, time and all senses was liberating. That was how the album Mahakali came about. I learnt a lot through the whole process and am much in awe of jazz musicians.

Your Fantasies for Children is dedicated to your sons. How did all these animals come to your mind and make you write about them? What inspired you to compose and the theme for this composition? They cover with wide range of rhythmic varieties. Do you write them for an educational purpose? Which one is your favourite?

There were animals I wanted to include, such as the cheetah, one of my sons’ favourite animals, but at the time I did not know how it was going to come about until a theme came into my mind out of the blue one day. The tunes or a specific rhythmic idea came to me at random times and I would just quickly note it down; if not physically possible, then I sang it to the voice memo in my phone. For some animals, the music idea appeared first before I found a suitable animal to name them. The house sparrow is one that holds much memory of a time when I used to pick up my eldest from school bus drop-off and on the way home we would spend some time looking for house sparrows, counting how many appeared each day, guessing which came which didn’t, chasing after some. That was a time before his younger brother came along; it was quality time between just the two of us. I couldn’t really pick a favourite as you couldn’t really ask me to choose between my children [laughs]. I had very dedicated and enjoyable time with each of them whilst writing.

They were not written with the intention to educate anyone, simply sharing, like how we share stories and imaginations.

Have your children or your students or your colleagues tried your new work? Have you received any feedback?

A very few of them may know I have been writing music but no, I haven’t really shared with them in that way. I am definitely looking forward to different renditions of these miniatures!

As you are also an active performer, do you think being able to compose will help you in your performing career? If so, how?

I wouldn’t say it helps my performing career but it certainly helps me look at the scores from more angles. I would definitely pay more attention to clarifying what the composer may want to convey, which one should as a performer anyway, but in more depth maybe.

What would you consider the most challenging aspect of composing music? How is it different from the challenge of performing?

This also relates to the last question you asked me. During the process of composing, I realised there could be a much larger gap between the impression of music I thought I had in mind and the actual music that is being put onto the score, but then that may well be the fact that I am not a properly trained composer [laughs]. This back-and-forth searching for the best language, the trial and error experiences help me look at other compositions more thoroughly and at the same time stimulate more imagination.

Would you continue writing? Say for other instrumentations? Any upcoming new work that you can share with us?

Yes, for sure. It has been liberating to be able to write whatever I want. I find it very therapeutic and one of the rare me-time moments a mother could ask for! I have written a short piano work called Partita’s Lullaby for a dear friend who is expecting her first grandchild, and the next after that is an elegy for violin and piano.

Interested readers may want to find out more about Evelyn Chang at www.evelynchang.com.