‘Many strings to his bow’, they say, but in my case, it has proved to be many strings and many bows: an organic collection of stringed instruments has grown that now comprises some forty or fifty items, all of which I play, spanning both Europe and East Asia. From my first love, the violin, came the erhu, but then the yangqin to provide an accompaniment and eventually the hammered dulcimer to give a more ethnically British flavour, as is described ‘Dolce Melos’, the first essay here. Then backwards from the violin to its Arab and European ancestors, the Medieval rebec and Renaissance fiddle that are discussed respectively in ‘A Smal Rubible’ and ‘Parnassus’, the second and third essays. Today, I played arrangements of Handel keyboard suites and popular ballads from the early twentieth century on the English hammered dulcimer, but tomorrow, which one will it be?

‘Dolce melos’, or ‘sweet melodies’, soon corrupted itself in the English language to become ‘dulcimer’ and this is the name by which the hammered trapezoidal stringed instrument is known to this day (see Fig. 1). The modern English version shown here, made by Timothy Manning of Frome, Somerset, has clean and clear lines, is light and portable, is made entirely from wood (including a plywood front plate), and is strung with steel strings. For each note, a ‘course’ of strings is provided: one string for each course for the bass notes, which are wound in copper, two for the middle register, and three for the highest pitches.

It is a little-known fact that the piano itself evolved from the dulcimer in the early eighteenth century by combining a keyboard mechanism and the notion of hammers hitting the strings to produce a versatile instrument that retained the sensitivity and colours of the dulcimer but had greater musical potential. All ten fingers could now engage the strings simultaneously, rather than just two hammers, and the orderly arrangement of notes on the keyboard largely solved the perennial dulcimer problem of striking wrong notes all too easily. 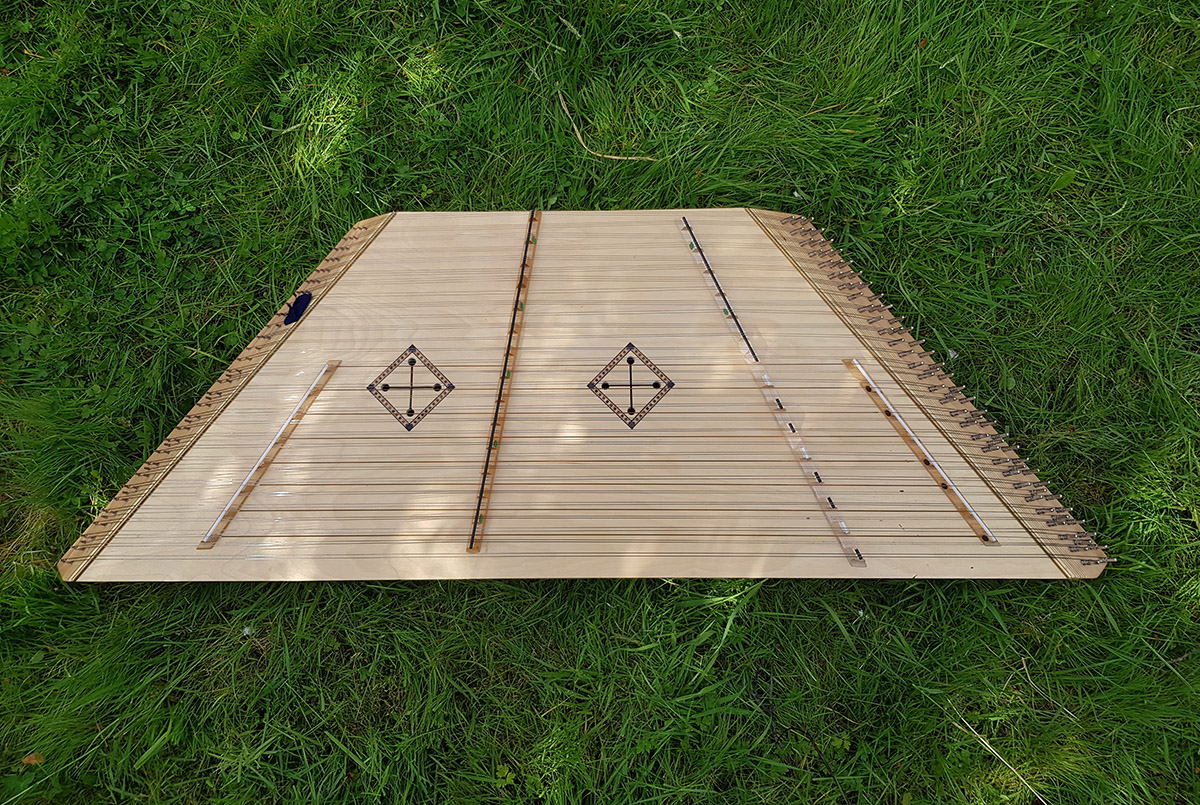 As a vernacular instrument, the dulcimer’s early history is obscure, but the earliest iconographical examples surface in the medieval period in Middle Eastern and European sources. It was evidently popular in the sixteenth and seventeenth centuries and found its way to East Asia, where it is known in China as the yangqin 揚琴. With the rise of keyboard instruments in the European baroque, it was gradually supplanted in the richer areas of western, northern, and southern Europe, but remained plentiful in poorer regions east of the German-speaking heartlands. With occasional exceptions, it has not found its way into the Western symphony orchestra or classical music canon.

This is a pity because all instruments are equal, even if some are more equal than others; the touch and sensitivity the dulcimerist has with his sticks directly striking the strings can be more sensitive than any keyboard instrument because there is no keyboard through which the player’s movements and emotions have to pass before the strings are brought into vibration. The dulcimer is, however, constrained by the number of strings that can be put on the instrument, which means the maximum range is five octaves, the limitations imposed by the two sticks that the player uses, and the technical complexity of striking the strings accurately if certain prescribed patterns are not followed. It also needs to be tuned after only a few hours of playing, a chore that can take up to a couple of hours and which requires patience and a fine ear. Especially in Hungary, where the instrument is called the cimbalom, it has been enlarged, more strings added, and even a damper mechanism supplied, but these features simply mean it takes longer to tune and is less easy to transport, and it starts to resemble a piano without a keyboard, so its essential rationale and individuality are lost. 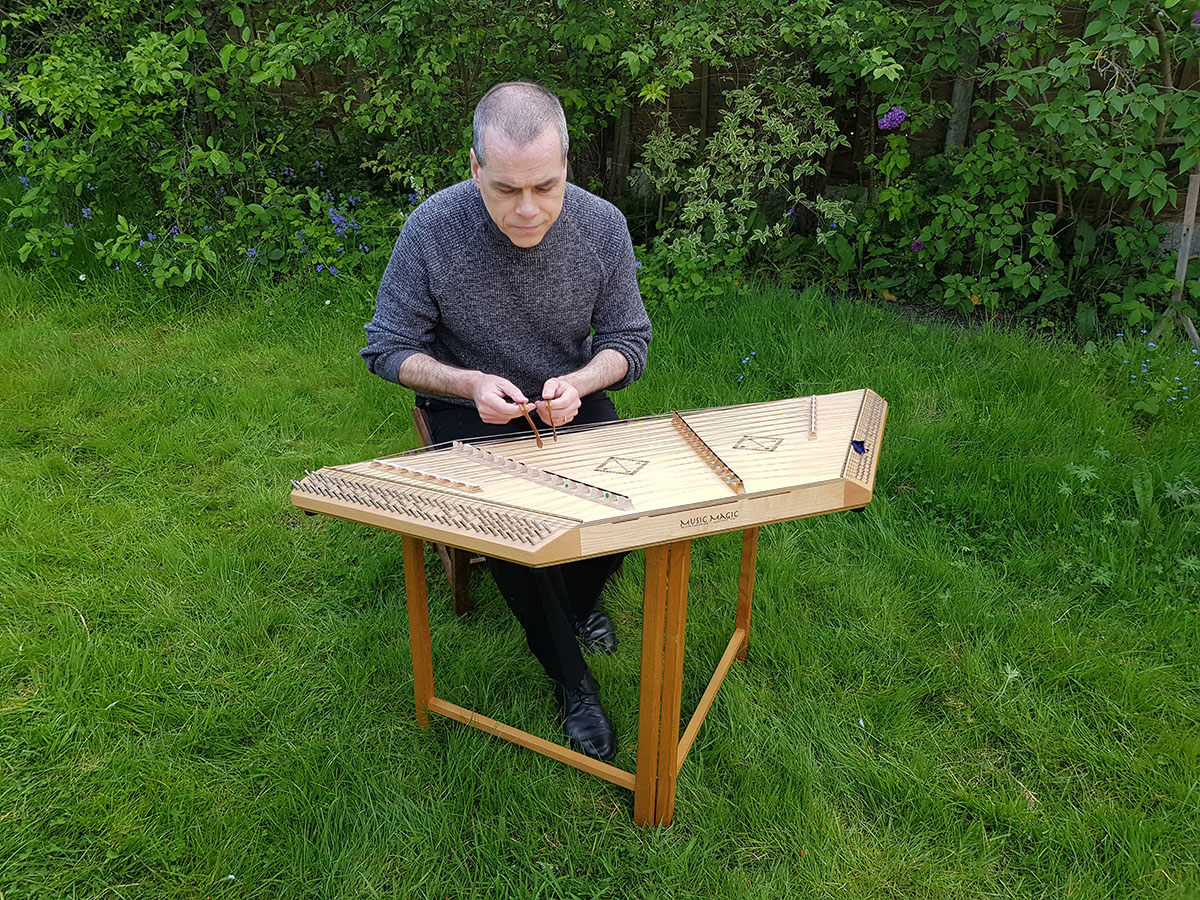 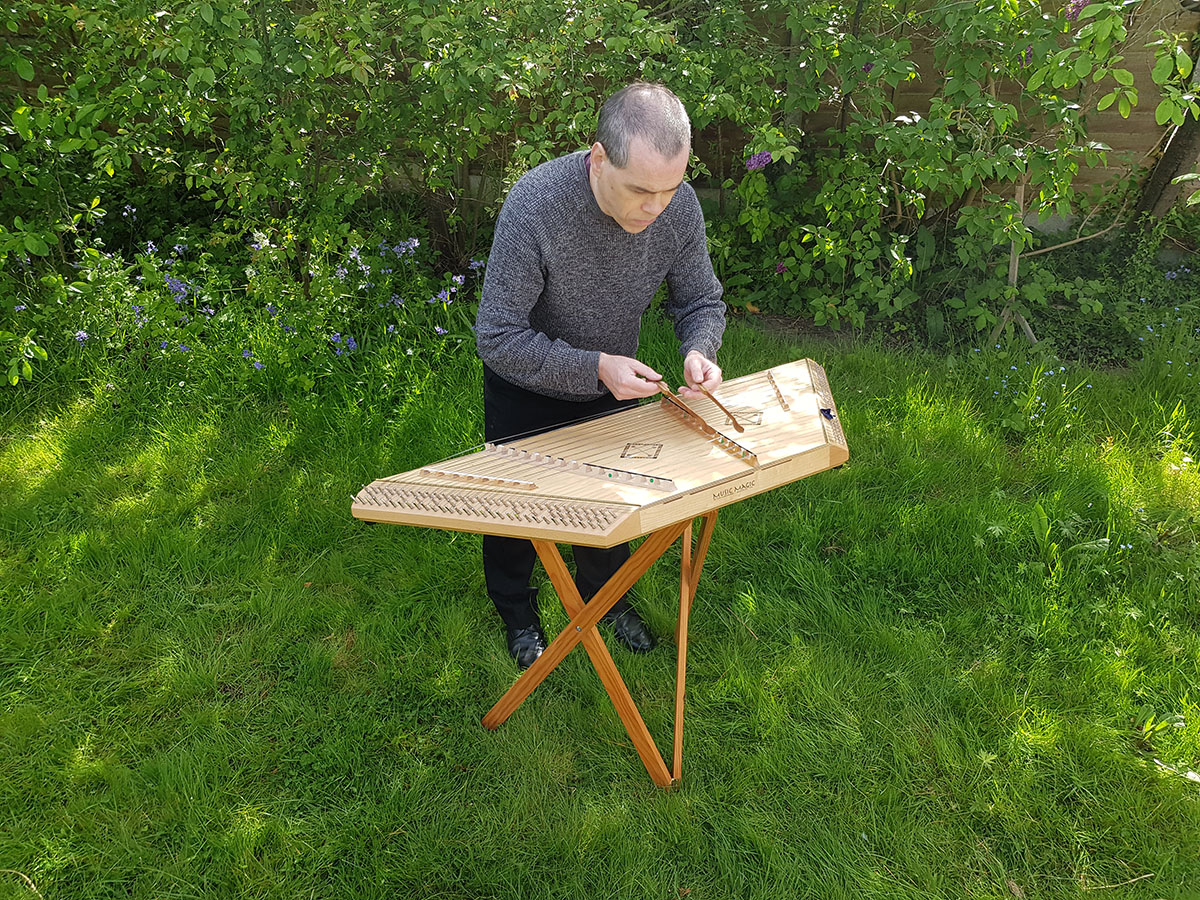 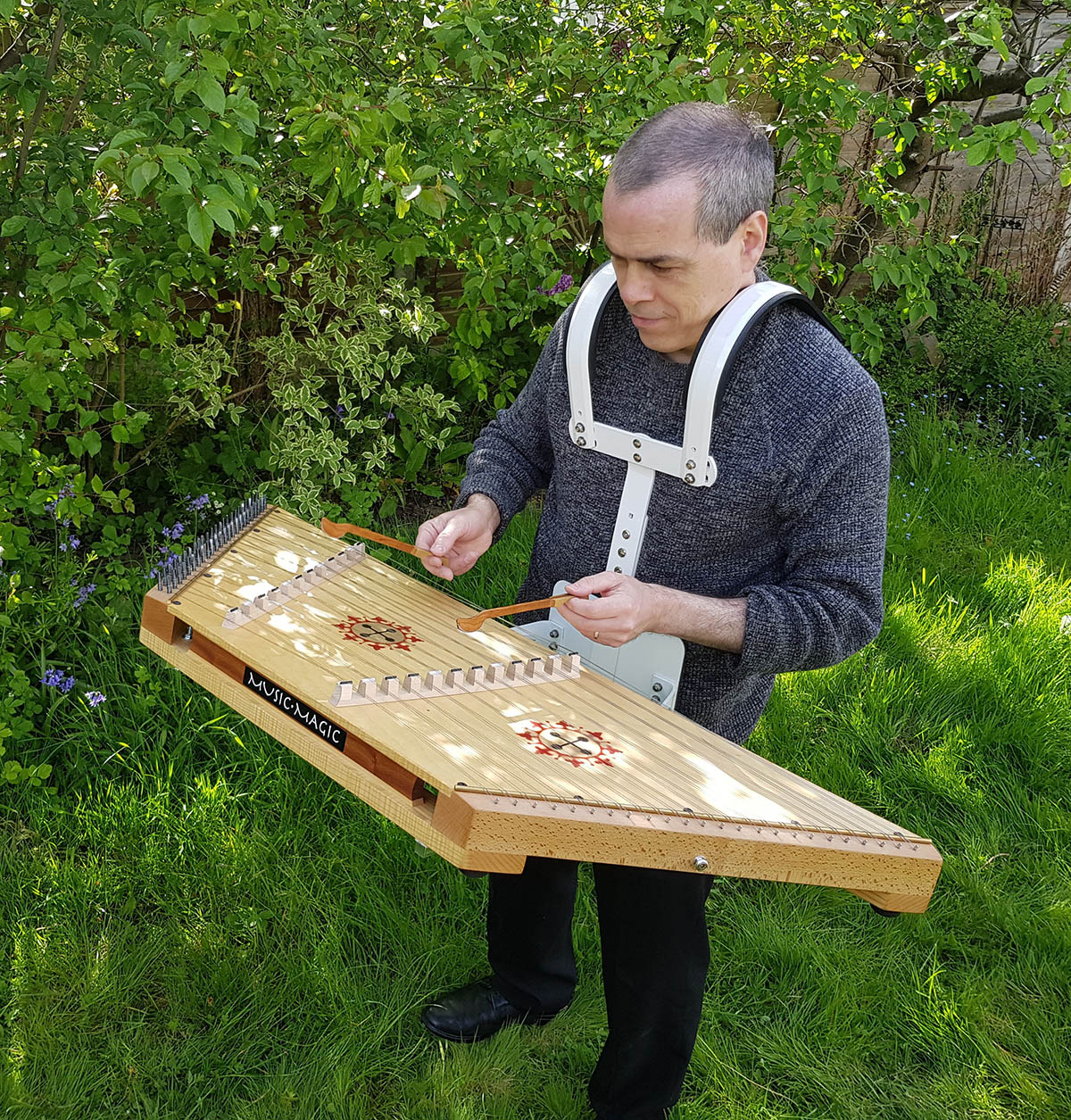 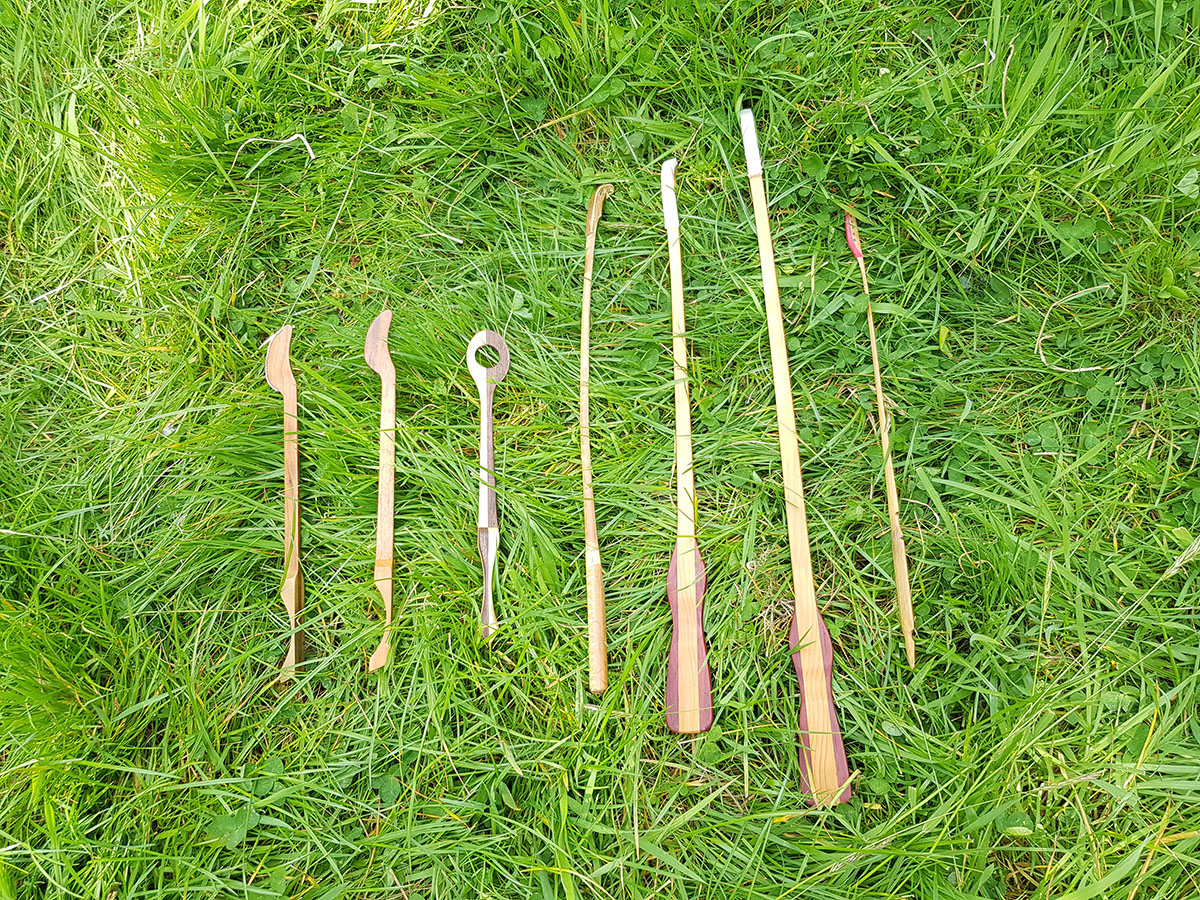 Figure 5: The side of the rebec. Photo credit: Tanya Huehns 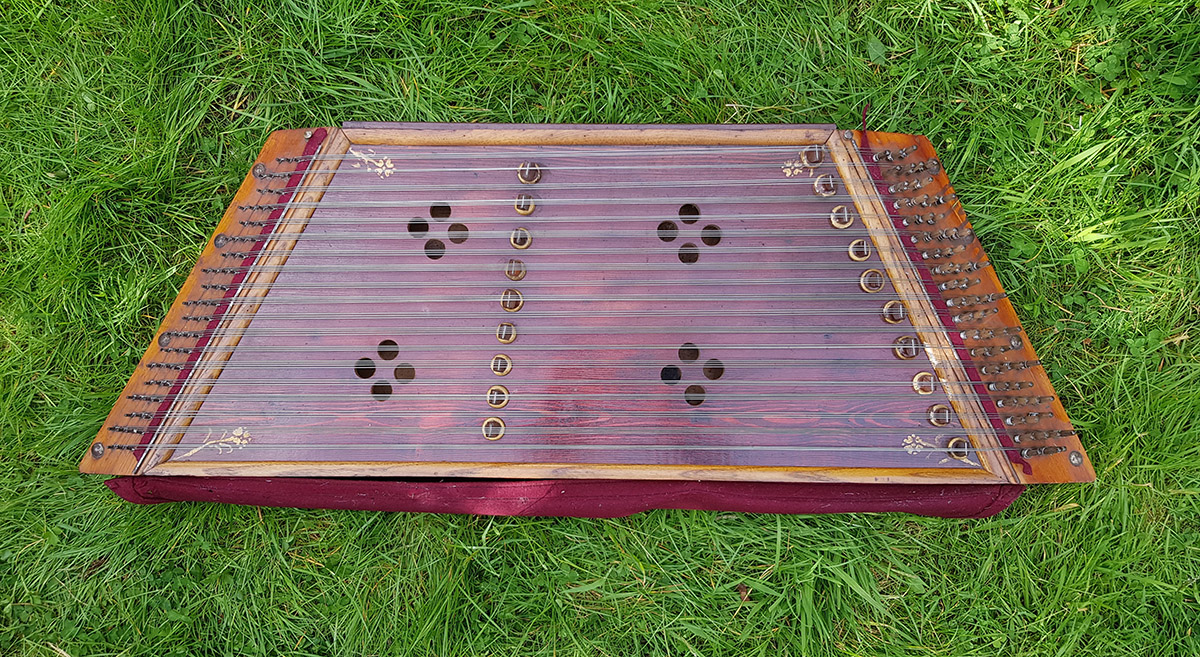 The trapezoidal shape is geared to placing the thinner, shorter, and higher-pitched strings furthest away from the player. The strings themselves are usually arranged over bridges and struck on both sides of the bridge to increase the number of pitches available. It can be played seated (Fig. 2) or standing (Fig. 3), and many early depictions have it carried on a loop around the player’s neck and played walking, perhaps to accompany dancing. This performance practice is mimicked by the custom-made brace shown in Figure 4, and, to make it more portable, the dulcimer itself is a smaller and lighter version with fewer strings.

Sticks come in a bewildering array of shapes and lengths, each designed to produce a different range of timbres, and several of these are shown in Figure 5. On the extreme left is the standard stick. It is fashioned from narrow, rigid, and lightweight wood and is relatively short, with its curved ends each lined with a strip of leather. Shorter sticks make for more accurate playing. If the leather is removed, the sound is harsher, more brittle, and brighter, as is shown on the stick the second from the left. Third from the left is a piebald ‘combination’ stick that has the leather strip on one side of the ring and bare wood on the other. It can be rotated in the palm quickly in performance to make either timbre available. On the extreme right is the modern yangqin stick, which is made from bamboo and so is extremely light and flexible, and the tip is faced with latex rubber.

As the ‘poor man’s piano’ and generally relegated to an accompanying role, historic dulcimers do not survive in large numbers, but Figure 6 presents one such rare example, again of English provenance. It too is of the generic trapezoidal shape but is dark in colour and made of oak. The bridges over which the strings are stretched have been replaced by movable ‘chessmen’, which means that they can be slid across the front plate as an aid to precise tuning. It was completely restrung when restoration took place and had evidently been out of use for many decades. Large iron bolts brace the instrument on both sides in the vain hope that this will prevent cracking of the front plate – a common problem for dulcimers – but to no avail, as on the left side a split has opened in the area where the strings are wound onto the pins.

Heavily constructed, it can only be played supported on a stand or table. It came with customised garden canes as its sticks (fourth from the left in Figure 5), which, although flexible and faced with leather, were clearly not original or indeed particularly well crafted. Various experiments with length and materials produced the flexible sticks tipped with felt (like piano hammers) that are the second and third from the right in Figure 5. To retain authenticity, the stick third from the right is the same playing length as the bamboo cane.

Several collections of the dulcimer music of England and North America were published at the time this instrument was made and all comprise simple melodies with no accompanying part. They are mostly folk songs, tunes from operas, sea shanties, hymns, popular ditties, and dances. This was clearly vernacular and proletarian music and dulcimers such as this specimen were probably common in homes where a keyboard instrument would have been an unaffordable luxury.

As a classically trained violinist and composer, my own journey to the English dulcimer began with the Chinese erhu and an ethnomusicological quest to explore the folk music of a (then) alien culture. I graduated to playing the yangqin simply to give my erhu students a fluent and appropriate accompaniment. Born and bred in rough-and-tumble London, a British citizen and scion of an ethnically Anglo-Saxon mother and German refugee father, as the years ticked by I realised that I should perhaps have lingered on my own folk music as well as fostering a love for all things East Asian. I found that the English dulcimer satisfied this musical econiche perfectly, particularly since so much yangqin technique was readily transferable.

Timothy Manning had already redesigned his instrument to add a bass octave, which means that the player’s right hand can provide an accompaniment while the left concentrates on the melody, greatly increasing the musical potential. This was an extremely promising point of departure. Given my ethnicity and interests, what then was my folk music? What was my own indigenous musical heritage? I quickly found that it was not exclusively the rural folk music of Thomas Hardy’s Wessex, though Tess of the d’Urbervilles had herself won my heart as a teenager; folk songs of the British Isles and other English-speaking nations nonetheless still have their place.

The dulcimer sound is clear, clean, bright, and quintessentially ‘English’, and reflects the construction of the instrument. It must be perfectly tuned, or resonances of fourths and fifths and modal melodies do not ring forth with their intended glory, particularly since, given that there is no damper mechanism, the resonance time is extremely long. Any music played on it must bring out these characteristics.

Beginning with the folk songs, I moved into arrangements of compositions of the English virginal school (Byrd, Gibbons, and John Bull), then Henry Purcell, but backwards too to early plainsong and two-part counterpoints; the voice of the oppressed: African American spirituals; pop songs we danced to in the 1970s; musicals; hymns I sang at school; choral pieces; Christmas carols; arrangements of music of the British classical revival of the early and mid-twentieth century; the blues; jazz. As an accompanying instrument: Scottish fiddling, English song, Welsh flute tunes. Even duets for two dulcimers – itself a virtuoso feat of simultaneous tuning – so that four-part harmony could now be realised. Specially commissioned compositions, but always stemming from this sound-world as their beating heart.

When you next press the keys on a piano, try not to think of interfacing simply with the keyboard and letting the instrument do the rest; think instead of the poor hammers hitting the strings on your behalf and pause in thought. Try to make the hammers live for you as if you held them in your hands and treat the keyboard as simply a means to make them behave as you ask. You will love it all the more. Remember that you are playing a stringed instrument and its ‘sweet melodies’ and feel for the vibrations under the fingers. And, whatever you play, treat the music as your own, as in fact it is, and always will be, a folk music coming from your heart.

Essays 2 and 3 will be featured in the upcoming issues of Vantage.

About the Author: Dr Colin Huehns studied violin with Emanuel Hurwitz. His first experience in music from outside the Western Classical tradition came at King’s College, Cambridge, when he wrote a dissertation on the music of Hunza Valley and Gilgit, Pakistan, an interest which culminated in a PhD thesis awarded by Cambridge University for ‘Music in Northern Pakistan’ in 1992.

He studied composition at the Royal Academy of Music and has remained active as a composer. Following a three-year British Academy Research Fellowship at Cambridge, Colin spent three years as a student at the Xi’an Music Conservatoire, studying the erhu with the distinguished virtuoso Jin Wei.

Since returning to the UK in 1999, he has taught electives in non-Western, traditional, and folk music at the Academy. He has also taught electives, which include learning the erhu, and Chinese and British members of the dulcimer family. As well as continuing to play the viol, viola, violin, rebec, Renaissance fiddle, and various dulcimers, his main teaching, research, performance, and composition interests now centre on his Chinese instruments, which include some twenty different members of the erhu, yangqin, and Mongolian horsehead fiddle families.

Colin’s erhu performances have included recitals in Munich, Leeds, Cambridge, and Edinburgh, but he is particularly proud of having recorded two CDs of erhu music written especially for him.